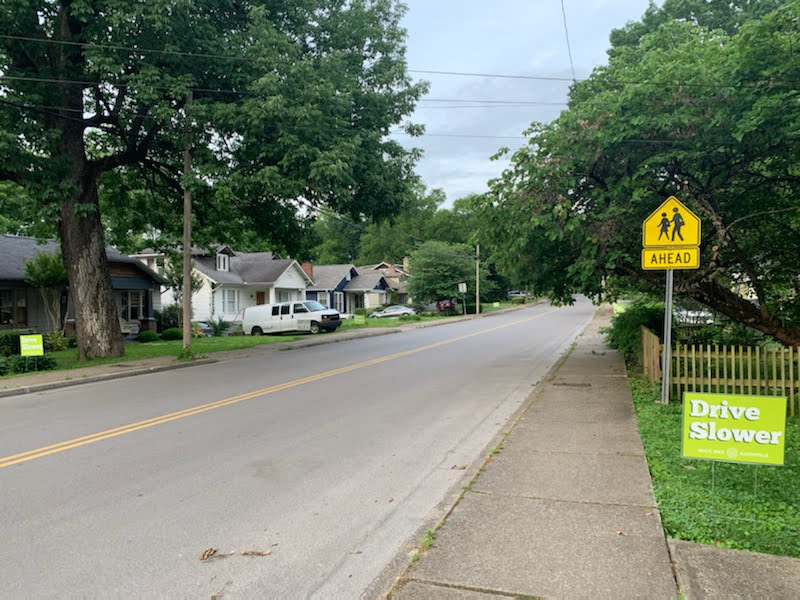 Are people driving faster during the Covid-shutdown?

A few months ago we started hearing from residents across Nashville that, despite the reduction in overall traffic volumes as a result of the pandemic-shut down, people were driving even faster in our neighborhoods. We have also read national stories about increasing car speeds around the country as a result of the shutdown (in the Washington Post for example).

Walk Bike Nashville decided to take a look at speeds in Nashville ourselves, in particular on Greenwood Ave in East Nashville, using Streetlight Data Insights. Streetlight uses big data to measure traffic -- we have a subscription to this year thanks to a grant from Spin. What we found was pretty surprising: despite an overall reduction in traffic this spring, average speeds were up and the number of people driving very fast were also up.

The residents of Greenwood Ave reached out to Walk Bike Nashville over the summer to report that they were seeing people drive faster than ever on their street. Greenwood is a collector street, with a lot of car traffic but also a lot of people walking, biking, and playing in front yards. We wanted to better understand what was happening on their street, so we used  Streetlight Data to analyze traffic volume and speeds on Greenwood Ave in the spring of 2020 and compared it to the spring of 2019. Here's what we learned.

This data presents another troubling side-effect of the Covid-19 pandemic and shutdown. We know that speed is the number one contributing factor to car-crashes, and is also key in determining if a crash with a pedestrian or bicyclist ends up being fatal.

Over 28 pedestrians have already been hit and killed by people driving cars in 2020 in Nashville -- well above where the city was last year at this same time. Addressing Nashville’s pedestrian safety crisis will require managing car speeds across the city. By far the most effective way to manage speeds is through infrastructure. Traffic Calming, narrow car lanes, wider sidewalks/bike lanes, and other street-engineering techniques are essential in addressing traffic safety, and in ensuring all Nashvillians feel safe going for a walk or ride in their own neighborhoods.