We wanted to alert you that the Music City Grand Prix will be impacting bike routes in downtown starting this Thursday (8/5) at 10am. Both the Pedestrian Bridge and Davidson Street (from 2nd Ave. to the Pedestrian bridge) will be fully closed to the public from around 10am Thursday, August 5 until around 5am Monday, August 9th. The bike lane on Korean Veterans Blvd is already blocked, and the entire street will also be closed. You can see a full list of closures here.

Throughout the past week, we have strongly considered cancelling the Pedal Prix, our event on the racecourse on Saturday, out of frustration with these closures. We have however recently learned, thanks to pressure from several community advocates, the Nashville Department of Transportation will install a pop-up protected bike lane around the event -- along 5th Ave to Woodland Street -- to ensure there is at least one safe option to bike across the Cumberland River. You can see the map of the detour below.  As a result of this effort by the city and event we will still host the Pedal Prix for those who have already registered, but we will not be partnering with the event in 2022. 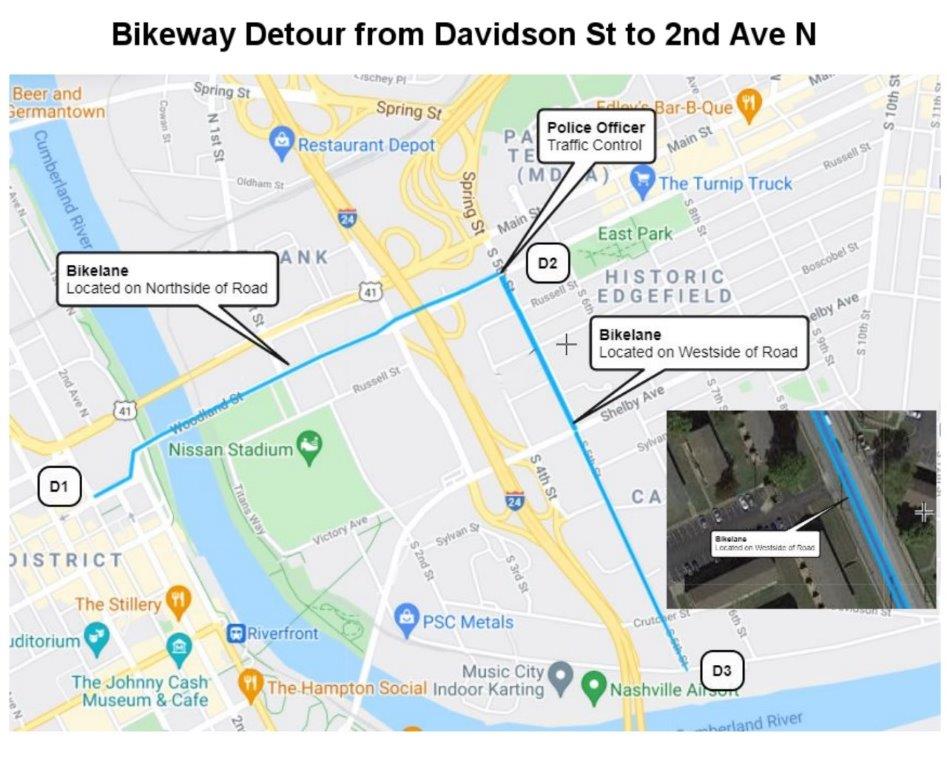 We are deeply frustrated by the impact this event is having on our public bike and pedestrian infrastructure. When the organizers of the Music City Grand Prix approached us last year to see if we would be interested in partnering to create a carfree hour on the course, we said yes, thinking we could work together with the organizers on the inevitable bike/ped detours and also provide some benefit for people who enjoy walking and biking.  We were initially led to believe the organizers’ intent was to minimize the impact to our bicycle and pedestrian infrastructure, and that the Pedestrian Bridge would remain open via elevator.

Over the past several years we have fiercely fought against the closure of our public multimodal infrastructure for private events. When the city allows bike lanes, sidewalks, greenways, or transit routes to be closed, people who use this public infrastructure are left with few to no safe options for getting around the city. A road closed to cars may cause a few minutes of detour, when you close the Pedestrian bridge there simply is no other safe route across the river.

Public multimodal infrastructure must be accessible to the public.

For those who have already registered for the the Pedal Prix, you will still be able to participate as planned. However we invite you, and all who are frustrated to join us in asking the city to prioritize the safety of people trying to get around our city, over the needs of private events. As Metro Nashville government continues to recruit large events to our city we need to pressure our elected leadership to figure out how to host events that generate economic activity for the city, while also maintaining access for Nashvillians to the few pieces of safe bike and pedestrian infrastructure we have.

Our city and our new Department of Transportation (NDOT) need to improve the process to understand an event’s impact on bike/pedestrian infrastructure and plan for safe detours well in advance of the event. Metro Nashville must charge private event organizers what it actually costs the city to keep bicyclists and pedestrians safe during the event.

We invite you to join us in our fight to keep our public multimodal infrastructure accessible to the public.

Sign our petition asking Mayor Cooper and Metro Council to pass a policy to require access for safe bicycle and pedestrian alternate routes to be required for all private events across the city.