Nashville Listed Among Most Deadly Cities to Walk 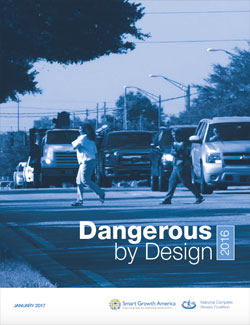 NASHVILLE — 209 pedestrians were struck and killed by cars while walking in Nashville between 2005 and 2014. That number is enough for Nashville to come in as the 37th most dangerous place nationally for people walking, according to a new ranking out today.

Dangerous by Design 2016, the fourth edition of the landmark report from Smart Growth America, calculates a Pedestrian Danger Index, or PDI, for the 104 largest metro areas in the United States as well as all 50 states and the District of Columbia. PDI is a calculation of the share of local commuters who walk to work (the best available measure of how many people are likely to be out walking each day) and the most recent data on pedestrian deaths.

With a PDI score of 92.9, Nashville comes in at number 37 on this national list of 104 metro areas (compared to 17 out of 51 in 2014). While Nashville’s PDI score has improved and our ranking has fallen slightly, the city still had 209 deaths in the 10 year period preceding this report, almost exactly the same as the 210 deaths from the previous 2014 report.

“The number of pedestrian deaths in Nashville is unacceptable,” said Nora Kern, Executive Director of Walk Bike Nashville. “To achieve the Vision Zero goal of no roadway fatalities, we must change our infrastructure to prioritize the most vulnerable road users—people walking. Nashville must make it easy, convenient and safe for people to get around by foot, whether you choose to walk or you have no other choice. You shouldn’t have to worry if you will get to your destination alive.”

“The momentum for safer streets is building in Nashville. The release of the draft for the city’s Strategic Plan for Sidewalks and Bikeways this week is a great step in the right direction, but it all comes down to implementation. This report highlights just how much work we have to do. The moment for making our streets safer is now.”

Download the full report to see the full rankings and analysis at smartgrowthamerica.org/dangerous-by-design.