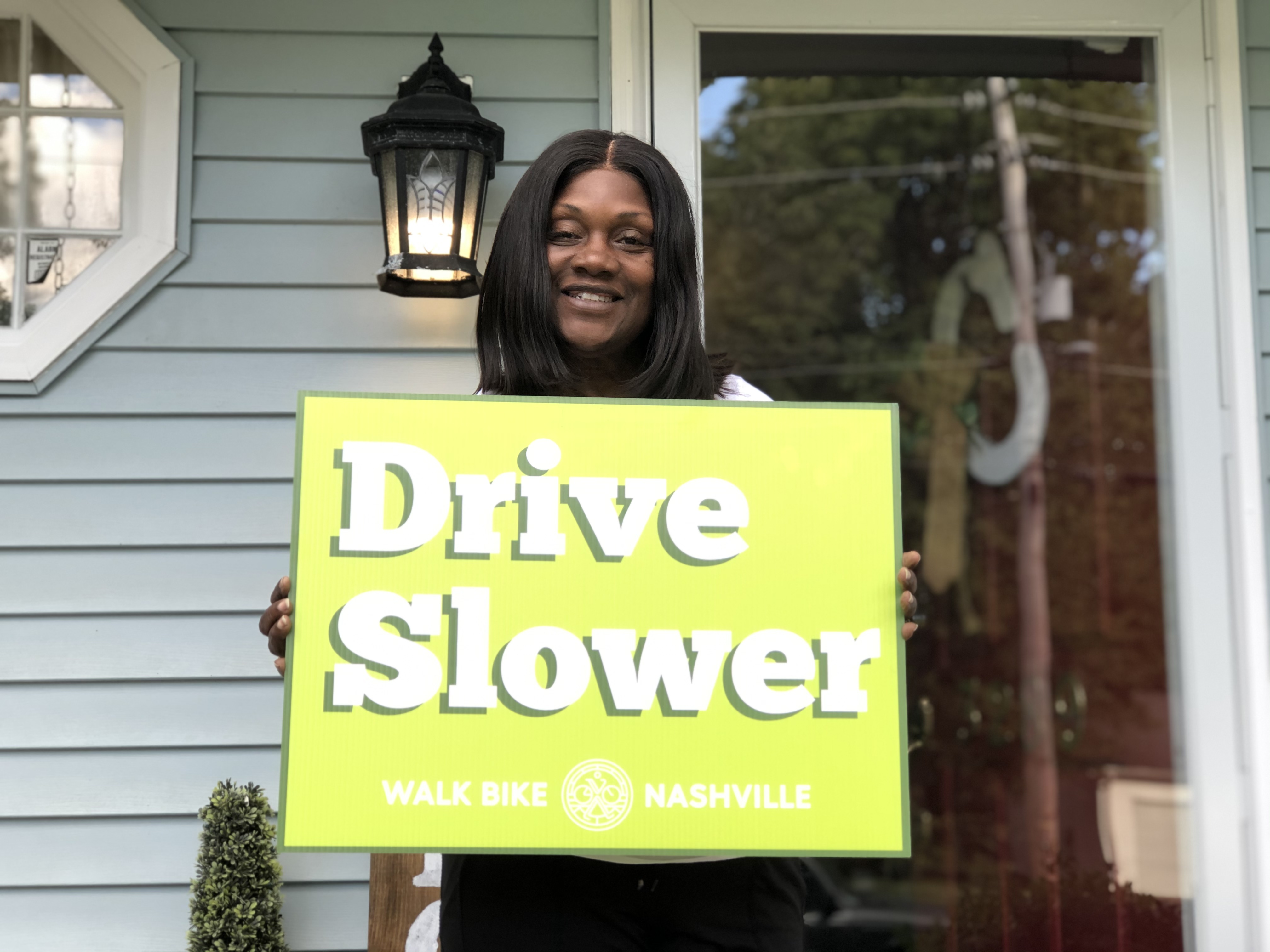 In the spring of 2020, Nashville, like many cities rolled out a Slow Streets program to temporarily limit car traffic on a few streets to help address the recent increase in speeding. The program placed barricades and signage to reduce cut-through traffic and create streets that prioritized those not in cars.

One of the many strange side-effects of the Covid-19 pandemic is increased concern over cars speeding through neighborhoods. With reduced traffic, open roads, and stressed out people, the problem seems worse than ever in 2020.

Speeding is bad news for people walking and bicycling. Lots of high-speed traffic makes neighborhood streets -- which in Nashville often lack sidewalks -- feel unfriendly and stressful places to walk or bicycle. It is also unsafe. High speeds are generally considered the top factor in whether a crash between a car and pedestrian will happen and how severe it will be if it does happen. Just a five mph difference in car speed can dramatically change the chance of survival if a pedestrian is hit by a driver.

We were excited by the Slow Street program’s potential to provide immediate relief from speeding and cut-through traffic but were curious how effective it was. Once the program ended in May, we reached out to Metro Public Works to see if we could help revive the program in the fall. They agreed, and through a competitive application process, we worked with Public Works to select ten neighborhoods for a month-long Slow Street for October 2020. Our goals were:

The Results are In!

WBN  closely monitored the fall Slow Streets program to determine if it successfully met our four goals. We used resident surveys to gather feedback on the program and utilized Streetlight Data to analyze car speeds, vehicle volumes, and relative pedestrian volumes. Streetlight uses big data to measure traffic and travel patterns. We are very grateful to have a subscription to Streetlight Data this year through a Mobility Data for Safe Streets grant from Spin.

We received 112 applications from 22 zip codes across the city. 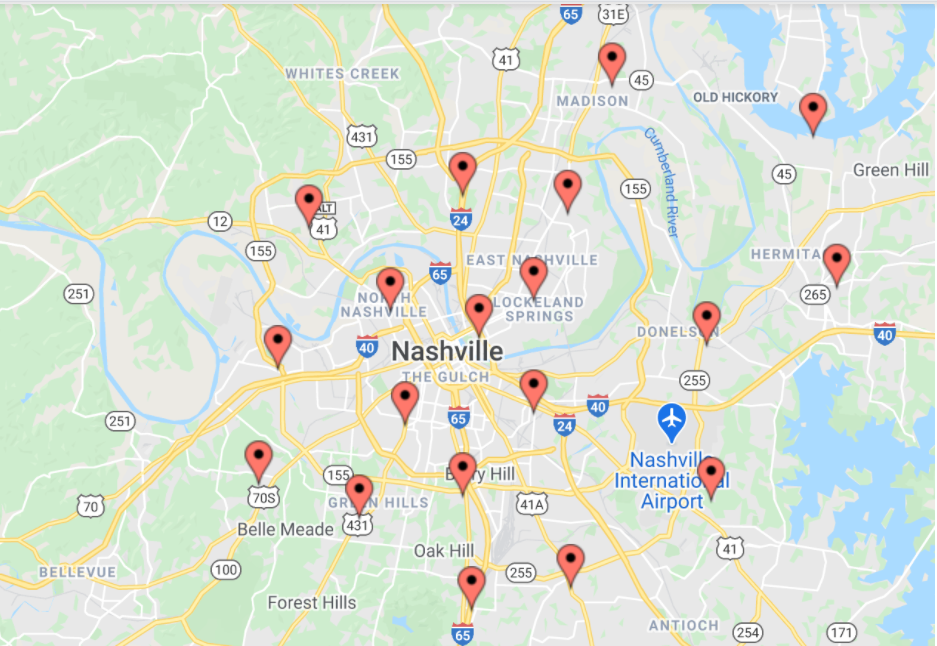 Some of the locations of the 122 applications

While the large number of applicants made the selection of neighborhoods extremely difficult, it allowed us to generate community support and identify champions within each Slow Street. Working with Metro Public Works, we selected 10 locations for 15 miles of Slow Streets. Our selection was based on community interest, geographic and economic diversity, and potential need.

Throughout the Slow Streets program, we provided residents with a survey to share their thoughts and feedback. This survey was distributed by lead applicants, shared on neighborhood email lists,promoted on social media, and amplified by council members. 190  responses were submitted. Walk Bike Nashville is very happy to see that the vast majority of respondents supported the program: with 65% saying they supported it compared to just 25.6% opposed. 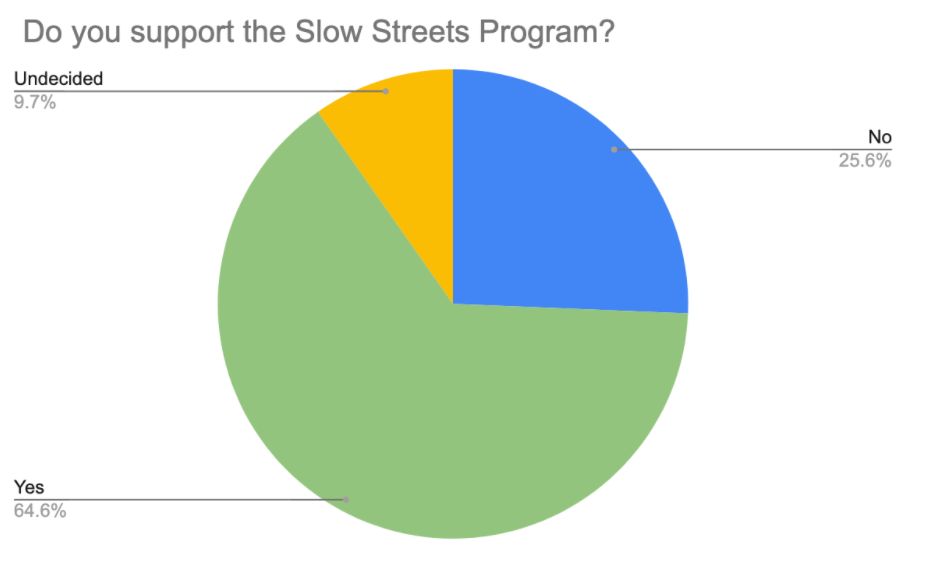 Metro Public Works installed barricades partially blocking the entrance to each Slow Street. WBN provided over 150-yard signs in English, Spanish, and Arabic, alerting drivers to slow down and provide information about the Slow Streets Program.

Using Streetlight Data we analyzed traffic volumes at the Slow Streets. We are excited to confirm that traffic fell on average 15% across the Slow Streets locations, with a couple of sites seeing over 20% reduction. We measured 2-4 different areas within each Slow Street. 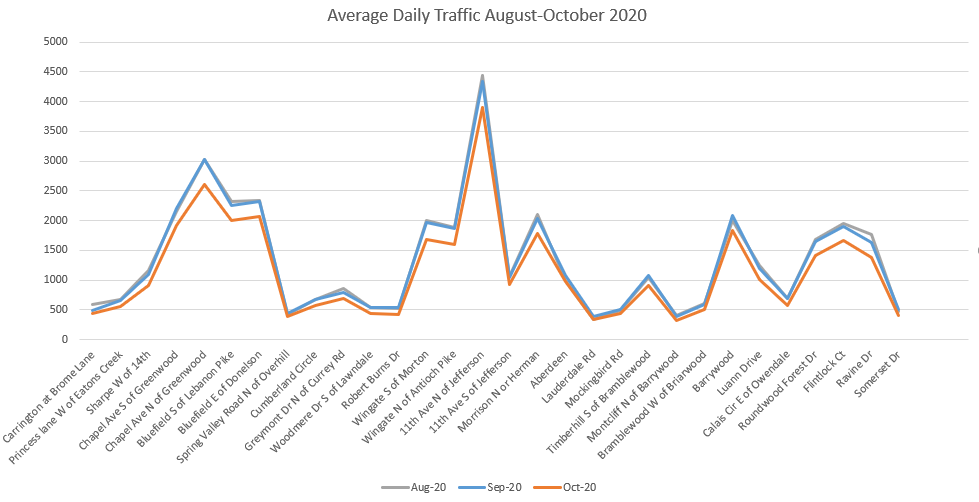 Streetlight also allowed us to study average vehicle speeds within each Slow Street, as well as the vehicle speed spread -- what percent were going 0-10 mph, 11-20mph, etc. The data here was more mixed. On the whole, speeds were on average 9% higher at the Slow Streets locations in August - October 2020, compared to August - October 2019. This confirms what many neighbors were reporting and the need to address speeding in 2020 more than ever. 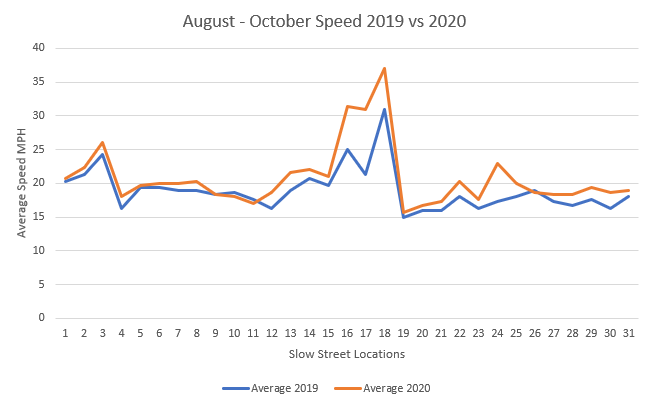 However, it wasn’t clear that the average speed fell during October when the Slow Streets program was in effect. We did see a reduction in a few neighborhoods, but it was not a consistent result overall. 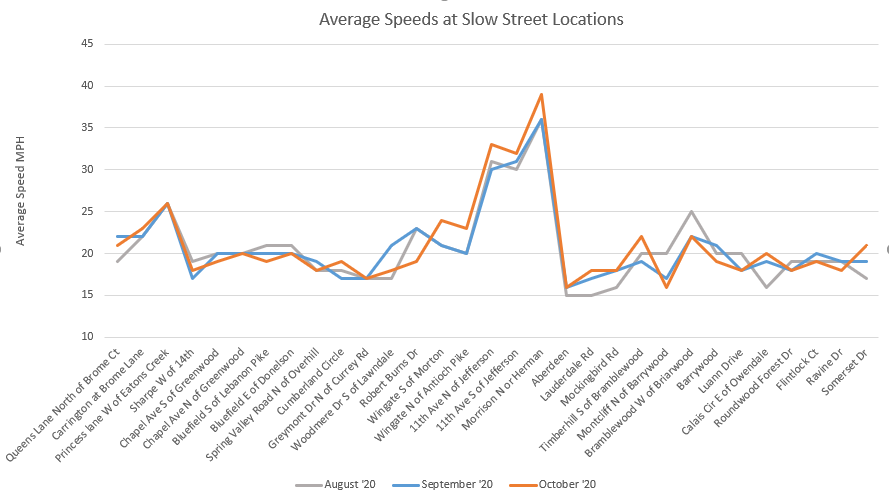 While there were a few neighborhoods and measurement spots that saw a speed reduction -- like Robert Burns Drive and the Crieve Hall area -- others saw an increase in average speeds in October 2020. Additional study is required to parse out what might explain these differences.

Although driver speed did not decrease, the reduced amount of traffic made neighborhood streets feel more safe according to the feedback responses.

However, our overall takeaway is that while the Slow Street barricades and signage reduced cut-through traffic, the traffic that remained was going at about the same speed.

Finally, we were also hoping that by reducing traffic and slowing driver  speed, the Slow Streets program would encourage more people to walk and bicycle.

The good news is that there had already been a considerable increase in walking in August - October 2020 compared to August-October 2019. On average, there was a 185% increase in daily pedestrian volume at the 30 locations we measured within the Slow Streets. 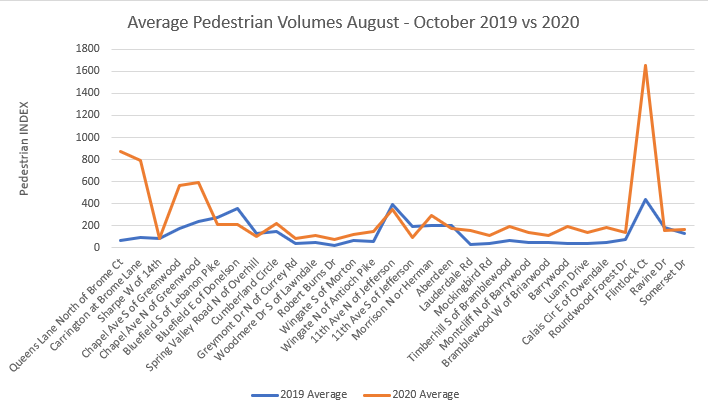 However, there wasn’t an overall noticeable increase in October 2020 -- some locations saw pedestrian volumes go up, and others went down. 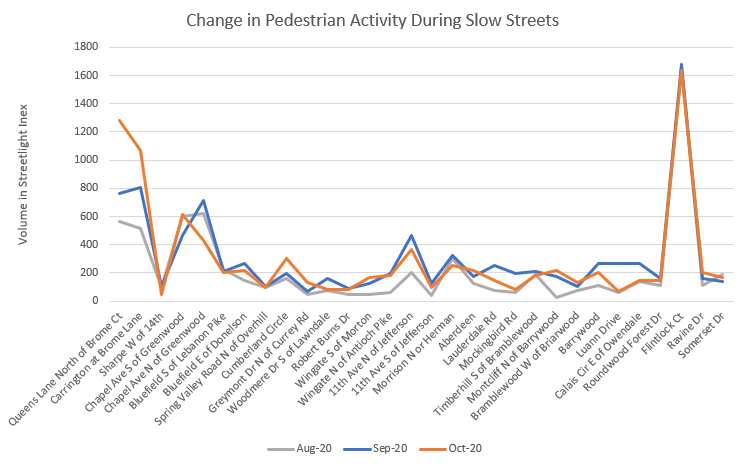 The Slow Streets program reduced traffic for streets that were already experiencing higher than normal number of people walking, it didn’t generate significantly more people walking for the month of October.

We were very excited to work with Metro Public Works to have a fall 2020 Slow Streets Nashville program. During a year when we were unable to host large events like Open Streets Nashville, we liked the dispersed nature of Slow Streets and were excited by the enthusiasm shown in our community-driven application process.

The Slow Streets achieved some of our goals -- they were very positively reviewed by community members and significantly reduced cut-through traffic. We heard from many people who lived along the Slow Streets that they were thrilled to have quiet streets for October.

We were also excited to see the significant increase in people walking in 2020 and feel this highlighted why a program like Slow Streets is important. It’s time to make our neighborhood streets safer and more comfortable for those not in cars.

However, Slow Streets wasn’t effective at slowing down drivers once they made it into the neighborhood. Speeding is up in our neighborhoods city-wide in 2020, and a huge concern for many Nashvillians. More substantial infrastructure is required to address speeding -- which is why it is more important that the Traffic Calming program be funded and expanded.

We hope you enjoyed reading our results! We’d love to hear any additional comments or thoughts you had about the program.