This past weekend, two pedestrians, Melanie Elaine England and Sherry Cameron, were killed in separate incidents on Nashville streets. These deaths make 16 pedestrian fatalities this year so far in Davidson County, already surpassing last year’s number of 15 deaths. At the current rate, we will end up with 24 pedestrians killed by the end of the year (or more, as pedestrian fatalities usually rise in November and December after daylight savingstime ends).

So why is this happening? We’ve had badly designed streets that are dangerous for pedestrians for decades. Are pedestrians wearing dark clothing, walking at night, walking drunk any more than they used to be? The answer is no, none of these situations have changed significantly. 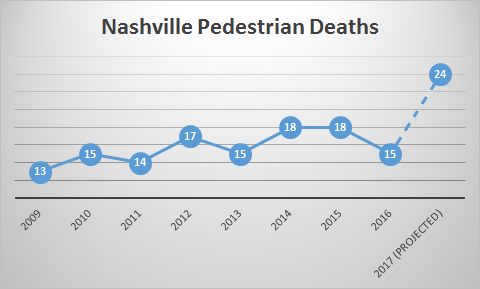 And while more deliberate research needs to be done to determine the specific causes of these killings, three things are clear:

83% of pedestrian deaths in Nashville from 2012-2016 were on Tennessee Department of Transportation (TDOT) state-controlled roads, the type of pikes that are built for speed: 4 or 5 super wide lanes, no sidewalks, sometimes no shoulder, and with marked crosswalks half a mile or more apart. These roads are meant to fast, and at 45 miles per hour, a person walking has a 35% chance of surving being hit by a driver.

It looks like it comes down to simple math. When there aren’t that many people driving and there aren’t that many people walking, the number of times pedestrians and cars will come into conflict is fewer, even with poorly designed road infrastructure. When those numbers go up significantly, as they have in recent years in Nashville, the number of people killed increases dramatically.

So, how do we drive less and walk more? First, we must generally agree on a principle that that our streets in Nashville are not just for cars and that we want to actively encourage getting around outside of a car. Secondly, and arguably most importantly, we must act quickly to fix our infrastructure to protect the safety of all people and encourage the use of walking, bicycles and public transit as primary forms of transportation. As the city of Nashville, we have acknowledged the first principle but not boldly followed with action. As a state, we have much further to go.

Cities around the South and the country are deciding their civic future by boldly changing the shape of their streets for the better. The best practices, engineering and technology are out there, and we do not have to reinvent the wheel. It is time that our state of Tennessee, led by TDOT, on whose streets people are dying, and our city of Nashville, who has much influence on even the state-controlled roads, decide that our city protects people on our streets.