Wondering Why BCycle is Leaving Our Parks?

Walk Bike Nashville members are big fans of bike share and e-bikes (nearly 100 people told us about their love for e-bikes) and many rely on them to move through the city. Last week, the community was surprised to learn nine BCycle stations would be relocated at the request of Metro Parks, upsetting many users and drumming up questions about bike share access in Nashville. We want to know why Metro Parks has called for the removal of BCycles from our parks and greenways.

In an announcement last week, Nashville BCycle shared that they will be temporarily closing nine of their bike share stations so that they can be relocated and opened by early October. All nine locations are currently in Metro Parks: Shelby Bottoms Nature Center, Percy Priest Dam Trailhead, Parthenon, Centennial Park, 5th Ave. S. and Demonbreun, Ted Rhodes Golf Course, McCabe Community Center, and Morgan Park.

It was unclear why this decision was made after a long process earlier this year determined that no action should be taken to regulate e-bikes on Nashville’s greenways. As e-bikes and bike share services surge in other cities, Nashvillians will have less access to bike share for the time being. To prevent other docks from being overwhelmed during the closure, BCycle has to take 40 bikes offline.

If you’re new to the e-bikes on greenways discussion, here’s a little background:

Throughout the whole study process, BCycle agreed to not open their stations located near greenways. In May 2022, BCycle was instructed to return their bikes to the Parks stations. Over the summer they were told to remove them. And here we are today, wondering why. 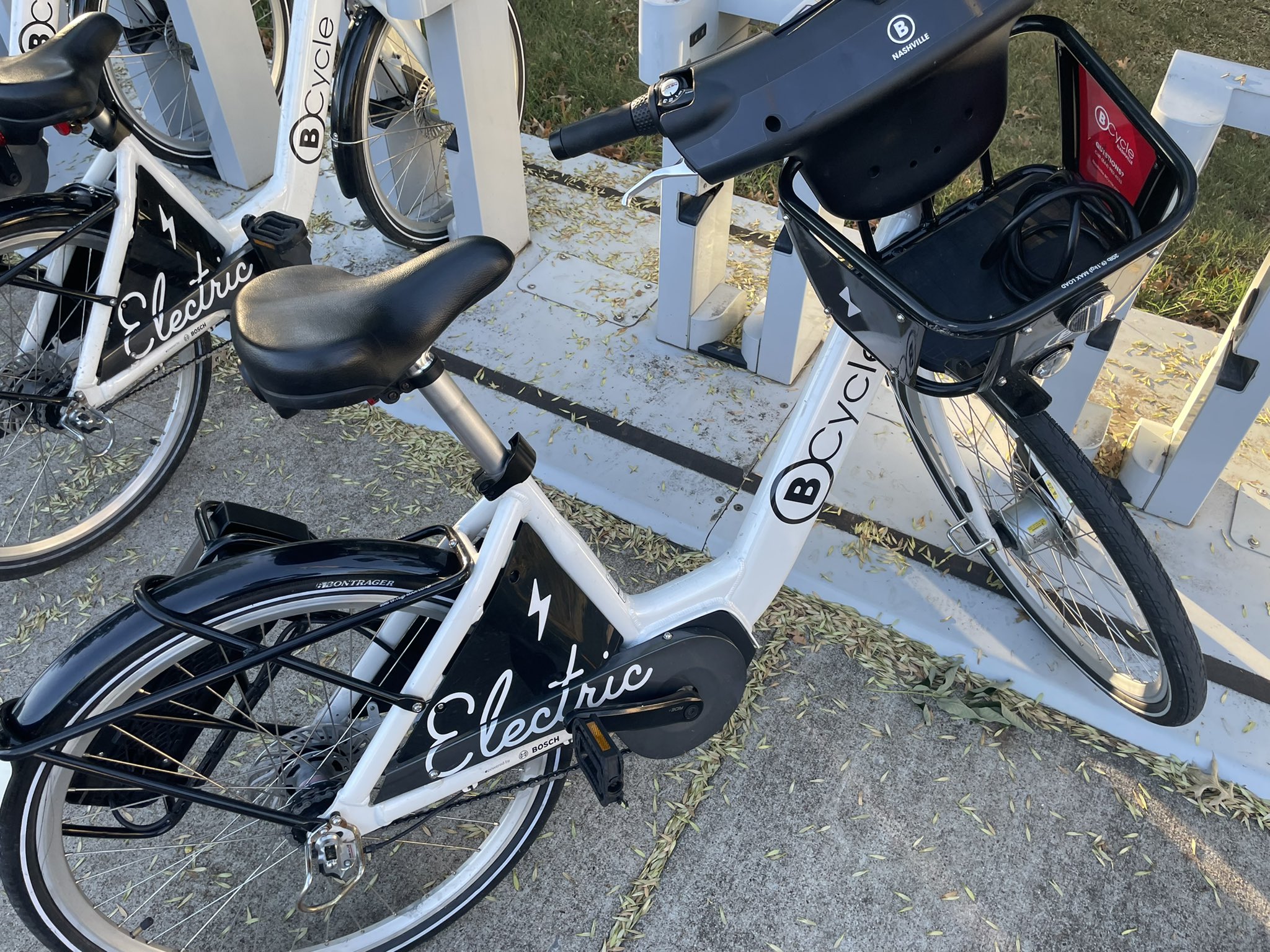 Walk Bike Nashville's Membership Party, riding part of the way on a greenway.

Having seen no statement from Metro Parks about the removal of bike share from our parks and greenways, except for a short quote in The Tennessean, Walk Bike Nashville reached out to Metro Parks, Greenways for Nashville, the Parks and Recreation Board, and members of the Greenways and Open Space Commission.

Director of Parks Monique Odom replied, explaining that while they’re supportive of a Metro-wide bike share program, they are waiting on the development of a scope of work for the program along with a competitive and transparent solicitation of vendors. When NDOT advised Metro Parks that they would be working with BCycle via a one-year contract while a formal RFP (request for proposals) process was established, Parks declined participation.

While Metro Parks directed BCycle to remove their bikes this summer, they encouraged them to leave their stations to reduce future costs associated with installation should BCycle be awarded a long-term contract down the road. But leaving empty stations would force BCycle to keep 40 e-bikes offline, reducing access to Nashville’s already limited bike share program.

According to Nashville Department of Transportation (NDOT), the RFP process would begin with a call for proposals in November, followed by procurement process wrapping up by March so that the selected bike share company would be up and running by the time BCycle’s current contract period ends on June 6, 2023.

NDOT Director Diana Alarcon told us that the bike share is too critical a component of connectivity and mobility to cause a break in the program, or a reduction in service during the new RFP process. Thankfully, they are working with BCycle to relocate six of the nine stations close to their current Metro Parks locations by installing concrete pads in the public right-of-way, but three, including the popular Shelby Bottoms dock, are still in need of a new location.

Our Stance and What You Can Do

We share the frustration and confusion many have expressed about the decision to move BCycle stations off Metro Parks property–it’s a blow to our bike share network. As the safest part of our city's bicycle network, Metro Nashville's greenway system should be increasing access and preparing for growth, not hindering it. Bike share is an asset to our parks and greenways. Denying access, even temporarily, is a disservice to our neighbors that rely on bike share for recreation and transportation.

We are calling on Metro Parks to allow the nine BCycle stations and their bikes to remain in our parks and near our greenways until Metro completes a RFP process for a city-wide bike share program that contracts BCycle, or another vendor, as the city’s longer-term bike share partner.

If you agree, contact the Parks and Recreation Board and your council member to let them know you believe bike share should be available in our parks without interruption. If you want to stay up to date on this issue, email [email protected] to join our “E-bikes in Nashville” Google group. Keep asking your questions and voicing your concerns. Together we will push for an improved bike share network.