What will Nashville Build? It all depends on Mayor Cooper's Capital Spending Plan 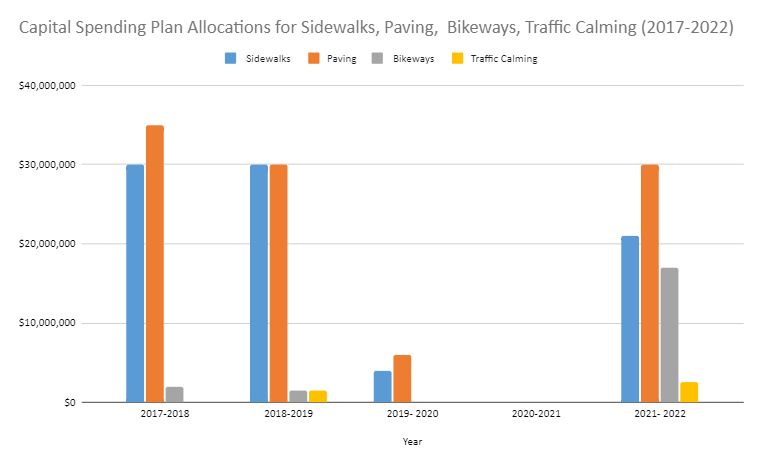 What is the Capital Spending Plan?

We have three key questions about the proposed Capital Spending Plan.

This CSP is a Return to Higher Spending Levels on Transportation.

After a year of spending freezes, Walk Bike Nashville staff is encouraged to see a CSP that prioritizes investing in transportation (see the Capital Spending Plan (CSP) details here).This CSP is the 3rd largest capital spending plan proposed in Nashville’s history as a consolidated metro government.

The recently released CSP includes the following commitments, which the Mayor is touting as early strides toward implementing his Transportation Plan.  More than $120 million is proposed for "transportation."

These commitments are exciting but there is not nearly enough investment proposed for public transit. There is $20 million dollars proposed for “traffic management projects,” some might benefit pedestrians, but most aim to increase traffic flow and shorten commutes for drivers.

Three main areas where we need attention and investment are:

Funding allocations do not match commitments to pedestrian safety and Vision Zero. 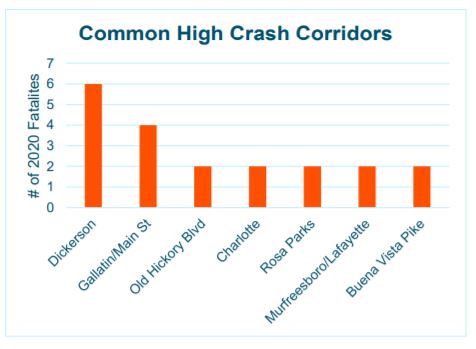 While we believe this CSP is a step in the right direction to following through on the goals outlined in the Transportation Plan, we want to make sure there is a continued focus on the urgent need for pedestrian safety improvements in the short-term. According to the Mayor’s press release “the sidewalk, paving and traffic management improvements will also include life-saving improvements to some of Nashville’s most dangerous pedestrian crossings.”

We would like to see a specific line item in the budget for safety, otherwise funding for safety is subject to other competing priorities and unforeseen issues, like storm damage and other natural disasters.

The Mayor declared a goal of Vision Zero, zero deaths in traffic, more than a year ago.

We need to hold the mayor accountable to follow through on Vision Zero. The Mayor’s transportation team is about to launch a Vision Zero planning process focused on safety but it isn't clear from this CSP how the recommendations, especially the urgent needs from that plan, will be funded.

We can not wait for the Vision Zero Planning Process to wrap up in November to make critical safety improvements to dangerous streets. According to current trends, with no interventions, Nashville will have lost more than 30 people due to walking on our streets by the end of 2021. During the 4th Annual Pedestrian memorial, the mayor said again these are preventable deaths and we agree. We want to see the funding and the urgency needed to match those commitments.

$10 million of the $21 million dollars for sidewalks is devoted to 7 blocks on Lower Broadway.

How was equity considered in funding allocations and project prioritization? Transit service is essential for Nashville's workforce. WeGo, Nashville's public transit system, received 30% of the funding they requested. Without additional funding for new buses, WeGo will not be able to expand service in the short-term.

There is very little project-level detail in the documents the mayor’s office has released so far. It is difficult to understand which projects are funded, in what neighborhoods, and when investments will happen.

Is the CSP funding safety improvements to the streets where pedestrian crashes are increasing?

From the project-level detail we do have, we know that there is $21 million allocated for sidewalks but more than $10 million of it is for the expansion of the sidewalks on 7 blocks of lower Broadway. $10 million out of $21 million for 7 blocks of downtown is disproportionate with the very dire safety needs across Nashville.

The downtown sidewalk appears to be the only new sidewalk expansion project in the CSP, with the other $11 million going to repairs/ADA upgrades to existing sidewalks and planning/design work.  Considering the budget crunch Nashville is facing, does it really make sense to spend $10 million on 7 blocks?  A cheaper solution would be to transform lower Broadway into a pedestrian-only zone.  Nashville experimented with this many times over the years, most recently at the beginning of the pandemic.

We know that due to Metro's spending freeze last year and the complexities of sidewalk construction, Metro Public Works does have a backlog of sidewalk projects totaling an additional $43 million to construct another 50 or so sidewalk projects. But this project backlog is telling of another issue within Metro--the internal capacity at Metro Departments to deliver on-time and on-budget projects. That's why it is not just the CSP that matters for advancing safety and transportation improvements but also the budget for operations.

Metro Nashville government has no staff whose primary job is transportation safety.

We’ll be watching closely when the mayor announces the operating budget in the next few weeks. We need more staff at the Metro departments that manage how the city responds to urgent public safety issues to ensure projects move quickly.

The amount of staff we have at Metro departments determines how quickly the city can get infrastructure built. Are Metro departments able to respond to known problem areas? is the city able to respond quickly to changing conditions? Or is capital spending being allocated and then work is being contracted out that then leaves little staff and resources for issues that emerge during the year?

The Budget and Finance Committee of the Metro Council will meet to discuss the proposed CSP on Monday, March 1st at 4 pm.

The mayor’s proposal must be voted on by Metro Council. You can review the materials for these upcoming meetings here and here. 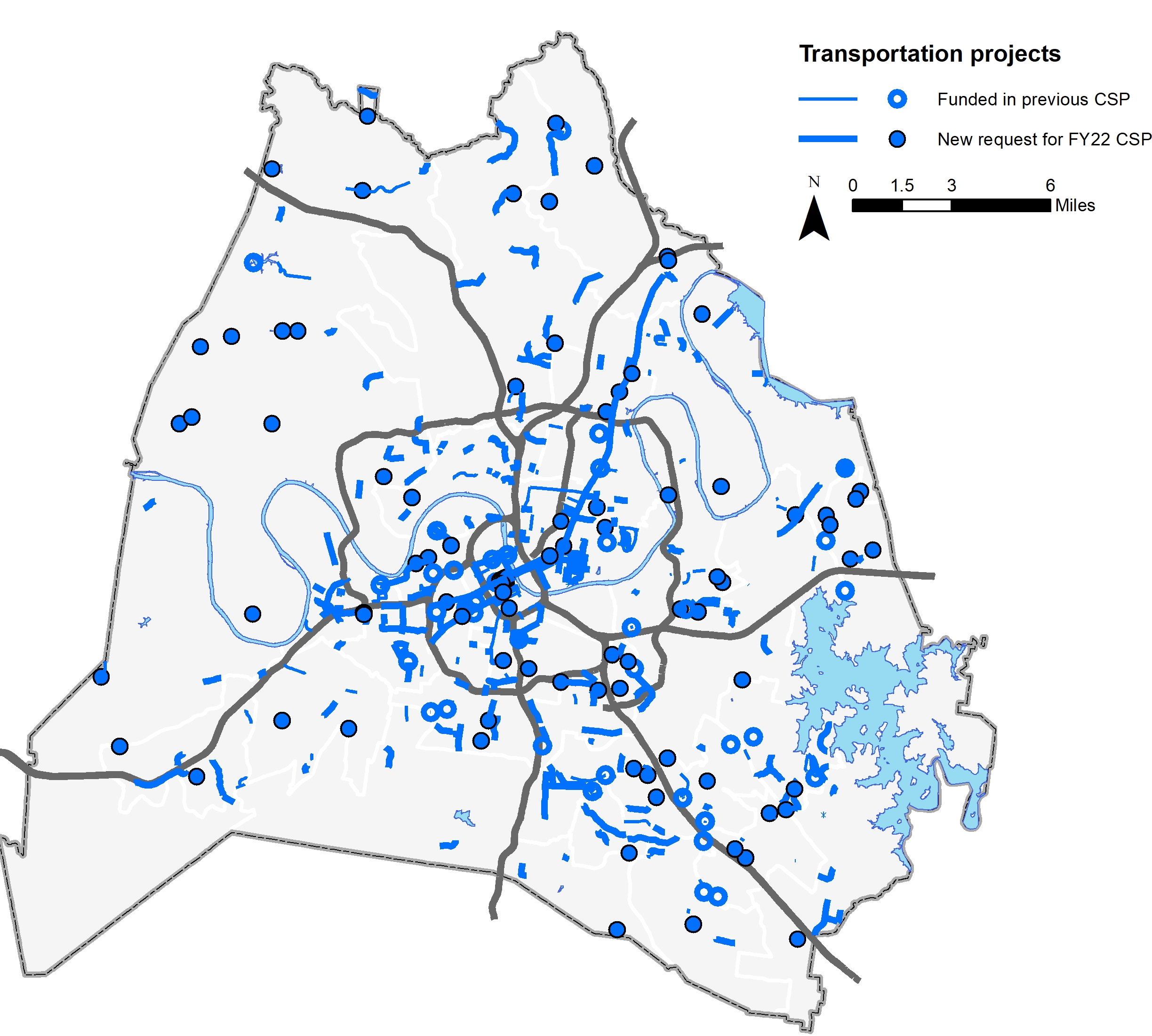 How to get involved.

Join our advocacy work at Walk Bike Nashville. We work together to push for solutions such as Vision Zero, infrastructure funding, and an equitable budget. Our next monthly Advocacy Corner meeting is Wednesday, March 17th at 6pm via Zoom. At this meeting, you'll hear updates on all of our advocacy work and figure out where you can plug in and contribute. Register here.