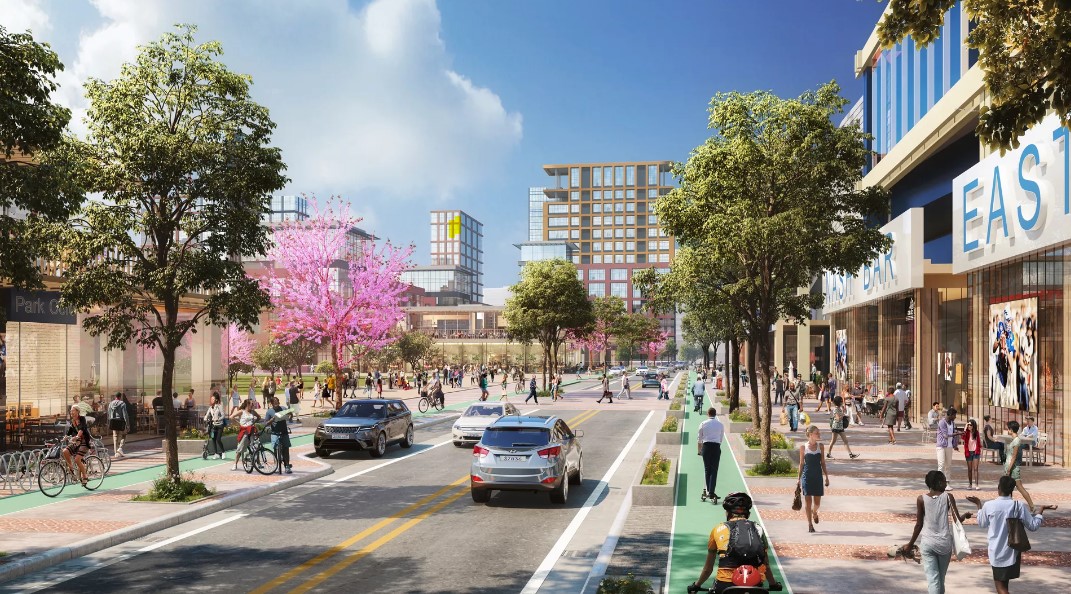 Since the Metro Nashville Planning Department released the Imagine East Bank vision plan on August 22, 2022, Walk Bike Nashville and its supporters have been asking questions about the pedestrian and bicycle-related aspects of the plan. The design of wide sidewalks and a pedestrian-friendly street grid are steps in the right direction. The majority of questions have been about bikeways and the plan as a whole. We hope to spark a larger conversation, first with a description of the current plan for bikeways on the East Bank.

What we know: Where the bike lanes are in the Vision Plan

In addition, a proposed pedestrian bridge to be built by Oracle would connect the East Bank to Germantown. 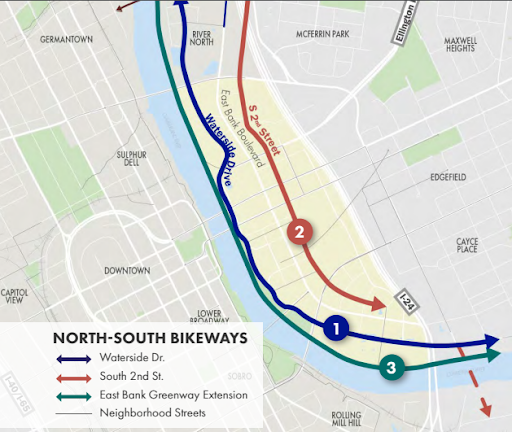 What we know: Where bike lanes are missing

The East Bank Boulevard is described as “the backbone for the new urban street grid”. Wide, tree-shaded sidewalks grace both sides of the street, but bike lanes are absent. The plan illustrates two car lanes and a bus rapid transit lane (BRT) running on both sides of the boulevard. 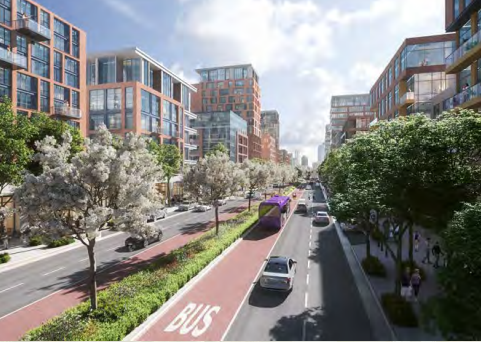 Rendering of the East Bank Boulevard, notably without bike lanes.

Questions we are asking:

Is this vision bold enough?

Walk Bike Nashville envisions a city where Nashvillians can get around without a car. The vision plan improves upon many of our streets, but is it a transformative vision? Like every planning initiative over the last 100 years, cars are prioritized. This mindset has created the Nashville we know today, a city built for cars first and people second. It’s the reason we’re forced to sit in traffic and drive to the grocery store, or school, when we could walk, bike, or take public transit. The East Bank is a 338 acre blank canvas in the center of our city. What do we want out of this new neighborhood? Do we want something reminiscent of the Gulch, Midtown, and SoBro, or do we want something different? This is a vision plan afterall, why limit our imagination?

How will this plan impact Nashville’s existing neighborhoods?

While this plan emphasizes the development of Nashville’s next great neighborhood, how will Nashville’s existing neighborhoods be affected? Nashvillians have felt the effects of growth in their pocketbooks and commute times. It’s only fair that people ask, what’s in it for me? Does this project offer creative solutions for our strained public infrastructure and transportation network? How do we ensure this plan doesn’t exacerbate our housing crisis considering it will attract Oracle employees and other transplants to a new neighborhood?

Why aren’t there bike lanes on the Boulevard?

As the first street planned for construction (as early as Spring 2023), the Boulevard will set the multimodal infrastructure standard for the whole East Bank project. Community members prioritized bikeability and walkability in the Imagine East Bank’s Multimodal Survey, naming "provide more spaces to walk and bike" as the top design preference for the Boulevard. In their blog post, the Civic Design Center points out that, “bike lanes would not only enhance the user experience, but they would actually contribute to a safer pedestrian experience”.

Will east-west bikeway connections be improved?

Does the vision plan move us toward Vision Zero?

Oslo, Norway was the only city in the world with no pedestrian or cyclist deaths in 2019. Oslo is also committed to making their city as car-free as possible. Nashville’s commitment to Vision Zero, or zero traffic-related deaths on Nashville roads, requires a move away from cars. Does the vision plan move us in the right direction?

What questions do you have?

We want to know what people on foot and bikes think of this plan. The East Bank is a blank slate and our best opportunity to create welcoming streets for all users in Nashville. It’s imperative that we get it right. What questions do you have about the Imagine East Bank vision plan?

What you can do:

The Metro Nashville Planning Department and Walk Bike Nashville will host a community meeting focused specifically on the walking and biking aspects of the plan, from 6 to 7:30 p.m., Tuesday, September 27 at Warner Elementary. This meeting is not an endorsement of the Imagine East Bank vision plan as it stands now–the document is currently a draft. The meeting is an opportunity for Walk Bike supporters to engage directly with the planning department on the walking and biking elements of the vision plan. We want to hear your questions and your input.

Attendees can expect a presentation from the planning department, followed by plenty of time for Q+A and hands-on engagement activities. If you’re interested in a more walkable and bikeable Nashville, we encourage you to attend. The East Bank is our best opportunity to reimagine streets for all users–we have to get it right. This is your chance to learn more about the plan from the pedestrian and cyclist points of view and have a say in the country’s largest planning project.