How Is Media Talking About Pedestrian Fatalities?

How do we talk about about the ever present tragedy of people being killed by cars while walking in Nashville? It often seems this loss of life continues to fail to register as a public emergency. Far too frequently media outlets and police reports (in Nashville and across the country) cover these tragedies as mere accidents, placing subtle blame on the victims rather than looking more broadly at our street designs and why Nashville is one of the most deadly for pedestrians in the country.

We all have a responsibility to think carefully about how we talk about pedestrian fatalities, particularly those in the media. To end the week we wanted to share a poignant letter from one of our board members, Victoria Cumbow, who was disappointed by recent coverage of the death of Mr. William Smith in East Nashville on January 12th. 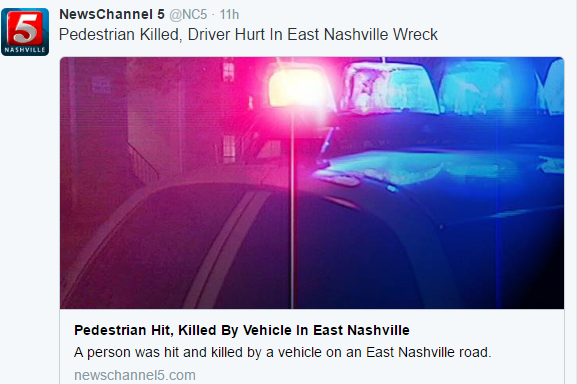 Victoria Cumbow is a member of theWalk Bike Nashville board of directors and works for JDRF International. The following is an excerpt from her response to a local story involving the death of Mr. Smith on January 12th. Emphasis was added by WBN.

I was very surprised by this story on your website today, and I wanted to share my thoughts. Originally, the headline reflected the injuries of the driver over that of the deceased. The lede of the story still reflects that, which denotes the importance of the driver's injuries over that of the person killed. It may seem insignificant, but the framing of that sentence is an ongoing frustration I see with the culture of Nashville traffic. I am an avid pedestrian and cyclist in the community, but I also drive my car each day to Brentwood from East Nashville for my work. I see many things on the road, and I see an increasing lack of concern for human life. That sounds extreme, but allow me to explain.

There have been times while crossing in a legal crosswalk, people have yelled at me in a threatening way. Once, a vehicle purposely sped up to "pretend" to hit me in a crosswalk and yelled at me for not walking faster. While cycling, people have thrown objects (once a glass bottle) at me or driven so close, I could reach out and touch the vehicle. And in my car while driving the speed limit, I've been passed, honked at, yelled at and a plethora of other things. It's terrible; the world is a mean place. I am a daughter, a sister, a friend. I am a living, breathing human being with the capacity to love and to hurt and to feel. Every single one of those encounters could've cost me my life, and one of them almost did.

As a community, we are in such a hurry and so inwardly-focused, we are not taking the time to recognize the life on the other end of our reactions. I think this story signifies and perpetuates that very thing. Based on your station's reports, a vehicle was allegedly stopped allowing the pedestrian to cross, but another vehicle didn't slow or stop to find out why the first vehicle was stopped (per your account). In passing the stopped car, the driver allegedly collided with the pedestrian, resulting in a person dying. This article has such potential to explore what happened, to explain the scene, to shed light on the severity of the loss of human life, but it falls short. I walked away asking even more questions than what I came into the article wondering.

A person's life was lost last night. Someone likely lost a brother, a child, maybe a spouse or a parent. A family's world is upside down, and the first thing you tell us is that a "driver was hurt". I would love to see news stories of compassion and feeling. I would love to see our culture become more caring and kind, and I believe that will start with those holding the microphone. Thank you for your time this morning, and thank you for what you do each day for Nashville.

After Victoria's email Channel 5 thanked her for reaching out and said they were going to do a follow-up on pedestrian safety in Nashville.

To everyone who walks, bikes, buses, or drives in Nashville, please remember that you are sharing the street with wives, husbands, brothers, sisters, sons and daughters. We're all in a rush to get home. Let's each take it upon ourselves to ensure everyone else on the street makes it home too. And always remember, traffic fatalities shouldn't be the norm. When talking about them try to remember that.

Additional Reading: Check out this great list of the The 4 Biggest Sins Committed By Reporters Covering Pedestrian Deaths, reported by Streetsblog last year.