Downtown Nashville streets must adapt to pedestrians, bikes and scooters 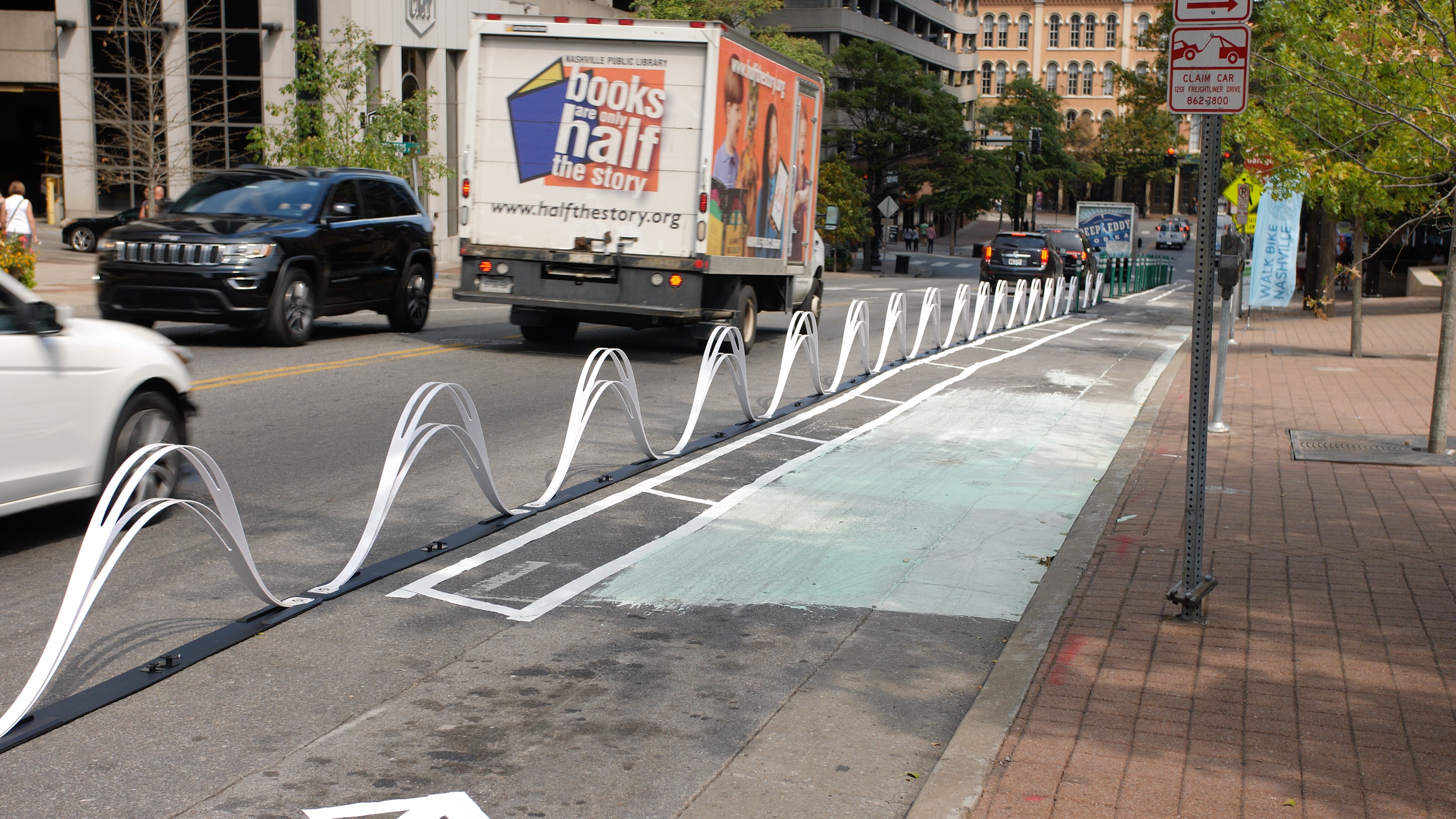 Downtown Nashville, for better or worse, is projected to continue to be the employment hub for our region. Yet, downtown remains inaccessible to many of our residents who can’t afford to drive and park there. Our transit system is shrinking while our downtown is expected to grow by 40,000 people, with over 70 new buildings in the pipeline. Unless we start rethinking how we use our streetspace downtown, all this growth will create more jobs that will be increasingly inaccessible to longtime Nashville residents and clog our streets with thousands and thousands of cars.

In September, as part of the annual PARK(ing) Day celebration and with the support of Spin, Walk Bike Nashville ​and our team of volunteers used flowers, planters, parked cars and some temporary paint to make a protected bike lane. Hundreds of people showed up to bike and scoot in our temporary lane and sign on to our petition in support of Metro’s proposed lanes.

Our bike lanes were for one-day only but ​our pop-up helped get Metro’s project back on track. We are thrilled that construction has finally started on Commerce Street and is expected to be complete in the next two months.  Plans for Third Avenue are still on hold while Metro tells us they "continue to work with this [Downtown Bikeways Steering Committee] group, and other downtown stakeholders, to develop recommendations specific to the needs of each unique section of Third Avenue."

Our downtown streets are designed to move as many cars and trucks as quickly as possible. These design choices were deliberate, and wrong, and most of our peer cities have made significant changes to reverse shortsighted planning decisions made in the 1950s and 1960s.

Nashville, meanwhile, continues to give away precious curb space for valet parking and to let every honky tonk block traffic while they accept deliveries and unload cases of beer for tourists during rush hour. People walking, on bikes and scooters are squeezed onto narrow sidewalks and no one feels safe. This is not the 21st century downtown that Nashville deserves and that we could be proud of, this is an embarrassment.

​The bike lanes on Commerce Street and Third Avenue will bring a measure of separation, safety, and organization, to streets that are already busy with people biking, walking, scooting and driving.

Downtown shouldn't be a barrier for Nashvillians who need more options for getting around. At our pop-up bike lane, we showed downtown Nashville how fast and easy it is to make life-saving, economy-boosting changes to street designs. We hope our new mayor shares our vision for a people-first downtown that is open to everyone, not just those that can afford to drive and park in downtown, and moves ahead with the proposed bike lane on Third Avenue as quickly as possible.

We'll deliver the more than 2,000 signatures in support​ of the Commerce Street and Third Avenue bike lanes to Mayor Cooper on Thursday, Feb. 13th. Meet us on the steps of the City Hall (1 Public Square) at 10am to deliver the message with us. 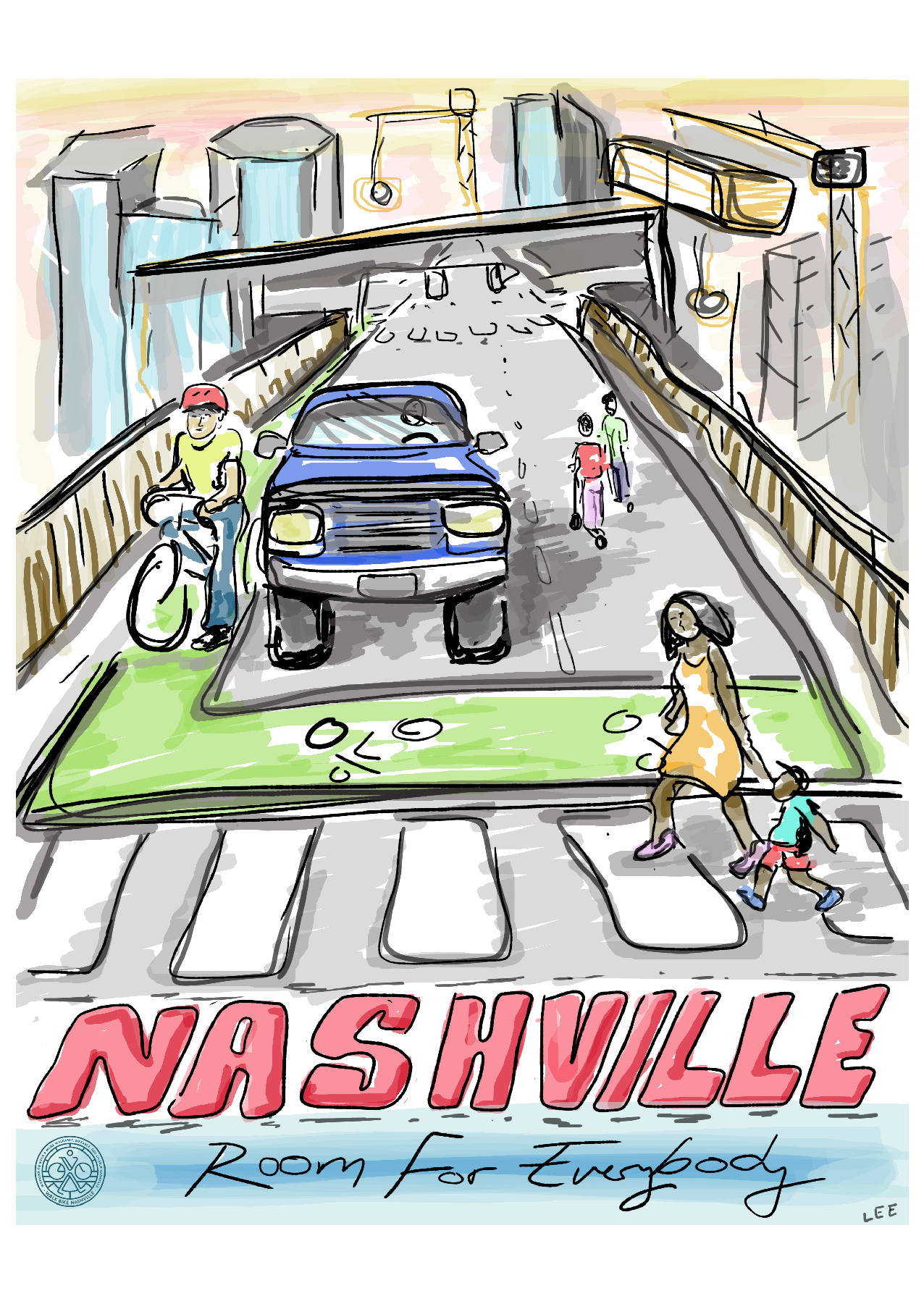 Original artwork created by our very own Jake Lee for our Commerce Street pop-up bike lane.