Add Your Voice to the WalknBike Strategic Plan 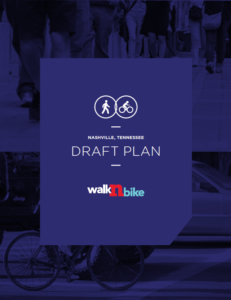 The WalknBike Strategic Plan draft was released January 9, 2017. The public comment period will be open at the WalkNBike website until January 31st via http://nashvillewalknbike.com/.

Walk Bike Nashville was a partner and involved on the Steering Committee for this plan. The plan has generally satisfied requests for prioritization, network and transparency, but we really want specific feedback and comments from the community now that the draft is released.

What can you do?

You are also strongly encouraged to provide feedback on general principles of the plan. We have identified several priority issues should be clarified or emphasized further in the final plan, and we hope you will add these to your comments:

The concept of Bike Boulevards is a new and exciting concept to improve the Nashville street safety and recommends 78 miles of neighborhood streets that prioritize bicycling through traffic calming that reduces traffic volumes and reduces speeds to 20 mph.

The plan includes an online public Status Tracker so that people can see the status of all approved sidewalk and bikeways projects.  It also promises an Appendix with project lists, both of which are essential to implementation accountability.

While the High Capacity Transit (HCT) corridors (Gallatin, Nolensville, Charlotte, Dickerson, and Murfreesboro Pikes) should addressed comprehensively in conjunction with nMotion and MTA, they are left out of this plan.

Walk Bike Nashville welcomes feedback on this comment sheet and the overall plan. We are happy to collect and forward any comments on the plan to the Metro Nashville WalknBike Plan staff.