Bike Routes in Name Only

Nashville has about 100 new residents every day and as of mid-last year, I am one of them. Nashville has been warm and welcoming in just about every way, save for one: the people who designed much of Nashville’s existing “bike network” did not have safety in mind.

There are two major changes that elected and transportation leaders in Nashville could make to dramatically improve quality of life and safety for people newly riding bikes (and, yes, scooters) in the city, which would ultimately result in more people riding bikes. First, reduce driving speeds by changing speed limits and redesigning streets; and second, update data immediately (and physical infrastructure as soon as possible) to remove any “bike route” designation from roads with speed limits greater than 25mph that lack safe bike lanes.

Making streets safe for all requires slowing cars down

Everyone has a different perspective on what “welcoming” means, but for me, the safety and legibility—i.e., how easy it is to navigate and understand—of a city’s bike infrastructure is something that can either make me feel welcomed or shunned. I have access to a car but I do not own one and I prefer to drive as little as possible for a variety of reasons (biking is fun, good exercise, reliable, affordable, and helps keep the air clean). 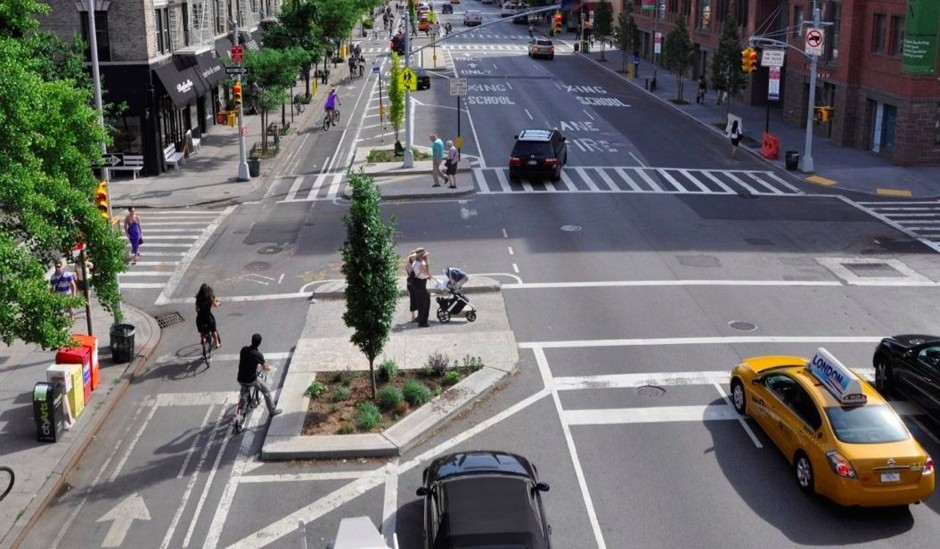 Photo via NYC Department of Transportation

On my bike, I do not feel welcome in Nashville. The problem in this case is not traffic, although Nashville’s streets have that, too. The problem with Nashville’s streets is that they have been designed to make people feel comfortable driving cars really fast. Even where speed limits are already 25mph or lower, driving fast often feels natural in wide lanes on Nashville’s wide streets. Traffic engineers applying standard rules of thumb can lead to a vicious cycle of road-widening and speed limit increases that together make streets less safe and less pleasant for all users. 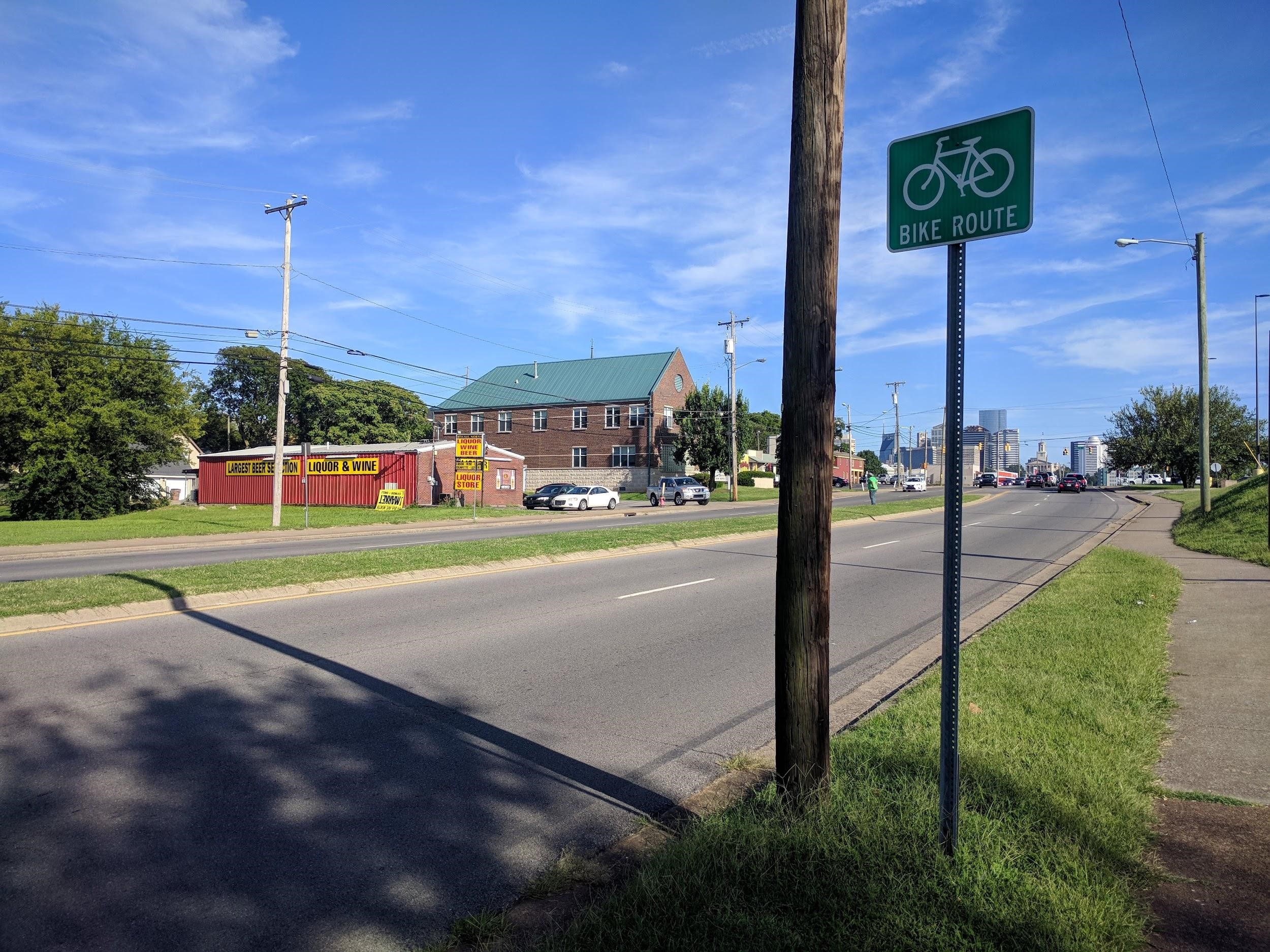 Rosa Parks Blvd, one of Nashville’s many “bike routes” in name only. Photo: Zak Accuardi

To that end, Metro Nashville’s WalknBike plan proposes excellent design guidelines, though Metro will be tested by political barriers to implementation. The Tennessee Department of Transportation needs to join them in making sure their engineering practices reflect a contemporary understanding of street design. This starts with acknowledging that speed is the greatest threat to people walking or on bicycles—according to the most conservative study cited by the Federal Highway Association, someone hit by a car going 30mph is more than five times as likely to die as someone hit by a car going 20mph.

Reducing speed can be accomplished most effectively and sustainably through street design and policy. Safety for all users means street designs that limit car speeds, for example, wider sidewalks, pedestrian islands, signal timing designed to reduce traffic speeds, and more—strategies which have been thoroughly catalogued and could be easily adapted for application in Nashville. Narrower car travel lanes in high safety-risk areas lead drivers to slow down, with marginal—and often positive—impacts on car traffic and significant increases to the number of people who can move along a street.

Cities from New York to Seattle have implemented citywide speed limit reductions down to 20 or 25mph, an important policy that will save countless lives for people walking, biking, and driving alike. I am partial to 20mph, because that is where this graph of fatality likelihood starts to bend upward:

The fatality rate of pedestrians in crashes with passenger cars as function of collision speed. Graph by Rosén et al., as cited in the FHWA report linked above

Few people in their right mind would ride a bicycle on a highway without a separated bike lane, myself included. But people riding a bike in Nashville can easily end up on unsafe, high-speed streets in part due to negligent Metro and TDOT data policy, as I have been learning first-hand.

Since arriving in Nashville, and not yet knowing the street network, I often rely on Google Maps to guide me from place to place. On one recent ride, Google navigated me onto James Robertson Parkway, also known as US-31, US-431, US-41, and US-41A—a state highway managed by the Tennessee Department of Transportation (TDOT). Merging onto a major highway unexpectedly, I was scared for my life. I also couldn’t help but wonder why Google recommended I ride my bicycle on this state highway(s)—until I saw the sharrows. 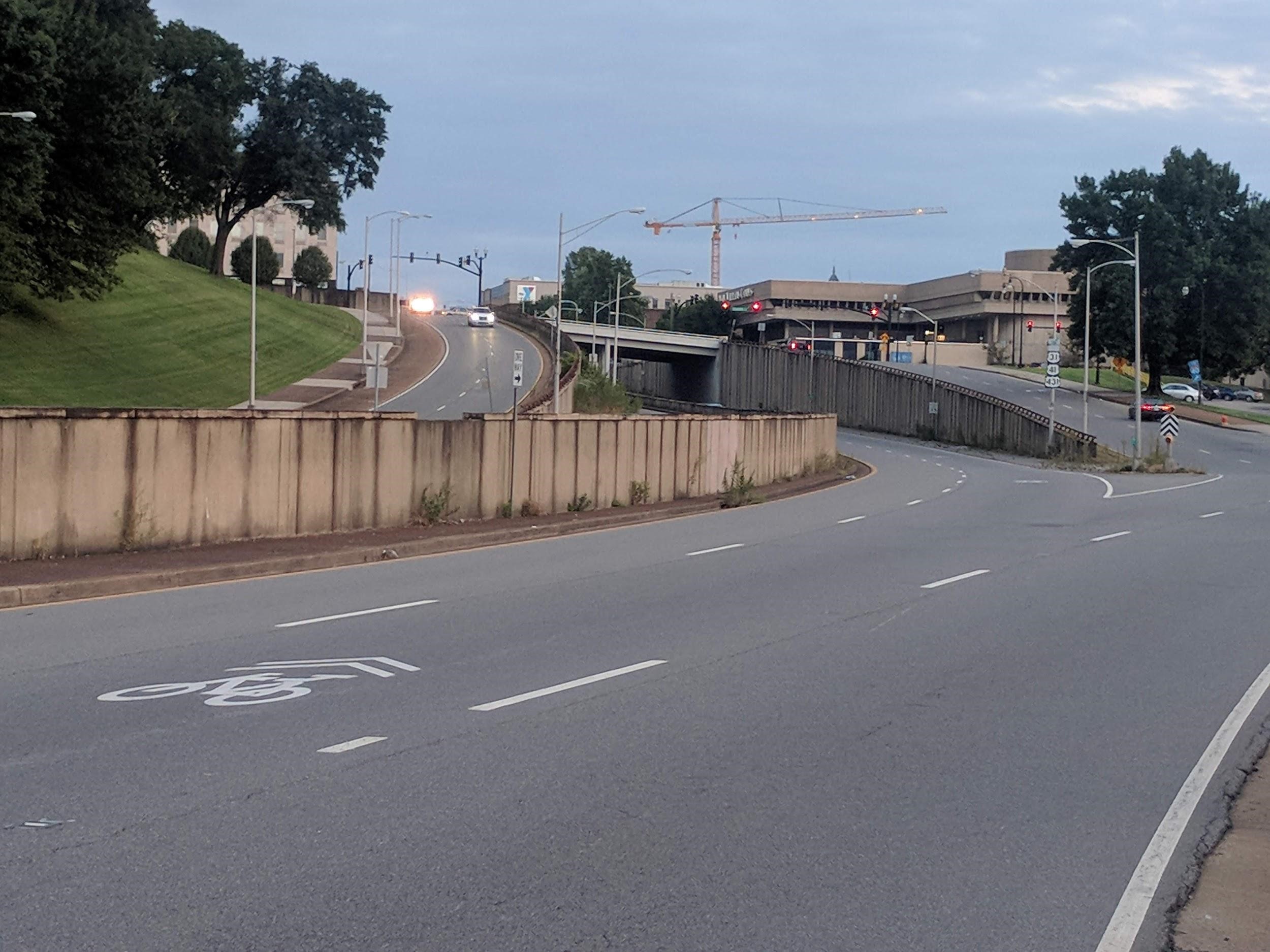 Sharrows are intended to improve safety by increasing awareness among drivers that there are likely to be bikes on the road, but repeated studies have shown sharrows to be not only ineffective but perhaps even counterproductive at improving safety.

This was not always known to be the case, but it is well-understood now. Regardless, sharrows on a curved, poor visibility section of state highway, with dark underpasses, where cars routinely drive more than 40mph, are criminally negligent. Even worse, these sharrows technically adhere to TDOT’s design guidelines (which merit separate discussion), which are more appropriate for rural roads than urban ones. Which brings us back to the question: Why would Google suggest that I ride on this route? 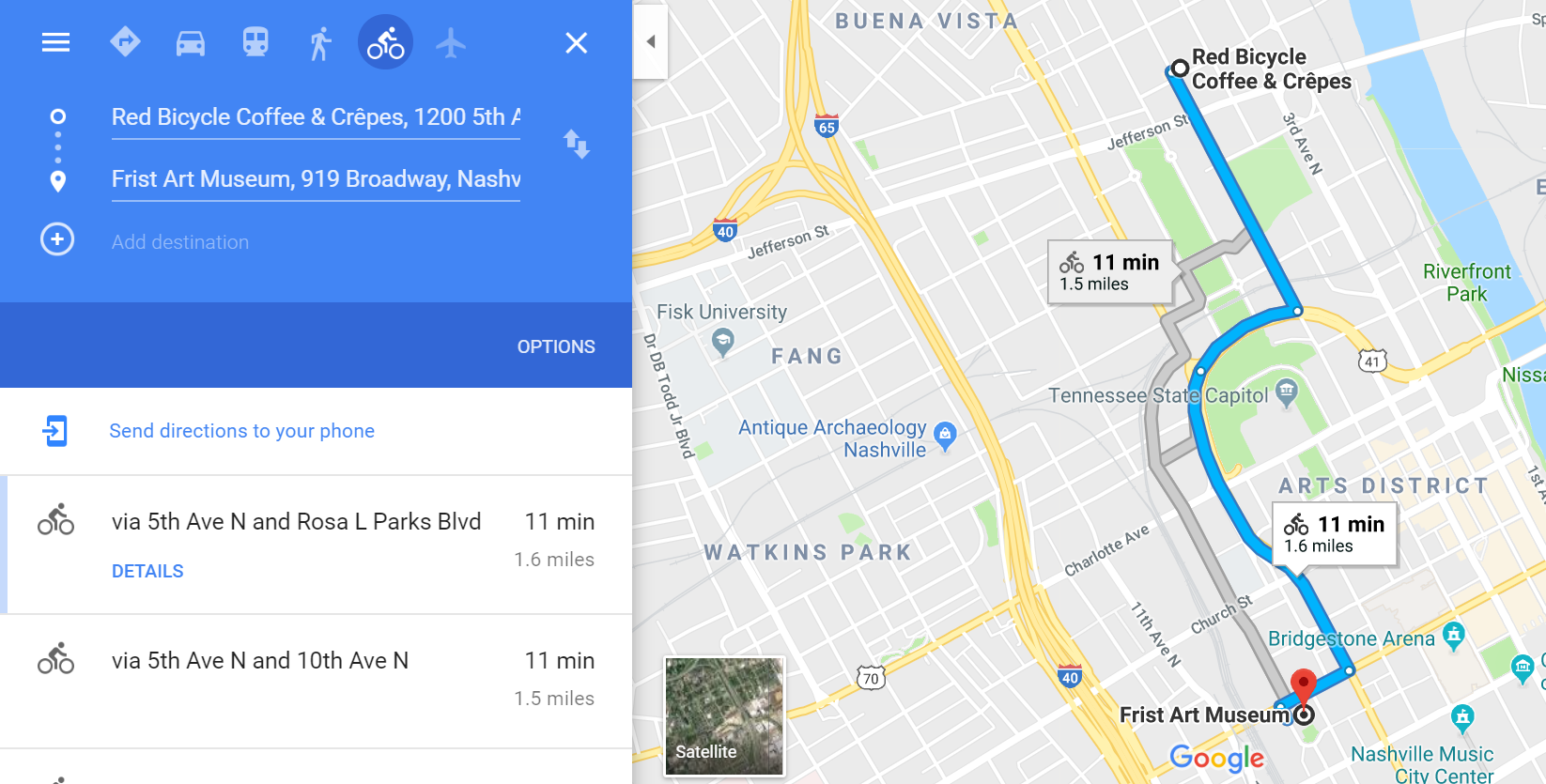 Well, that is because Metro’s (and/or TDOT’s) official data—data that Google uses to give bike directions—shows it as a bike route:

Metro and TDOT both look better, on paper, by including these unsafe “bike routes” in their public bike network datasets, because it provides the false impression that the agencies have succeeded at building a functional bike network. This gives both agencies an incentive to keep including these dangerous routes in their datasets merely to pad their statistics. By being dishonest about their progress toward building a safe, connected bike network, both Metro and TDOT are putting Nashvillian lives at risk, adding stress to the travel of people on bikes and in cars alike.

It is time for Metro and TDOT to retire James Robertson Parkway and any other road with sharrows and a speed limit greater than 25mph from this map, and instead to be both honest about the current state of bike infrastructure in Nashville and to take responsibility for the safety of Nashville’s residents. No one should ride a bicycle on James Robertson Parkway in a lane of mixed traffic, but right now Metro and TDOT—via Google—are inviting people to do just that, and putting their lives, my life, in direct danger as a result. This threat is greater for new cyclists and new Nashville residents, who don’t know the bike network well yet and who are also the people that Nashville needs to make a good impression on in order to keep them on bikes and out of the region’s growing car traffic. 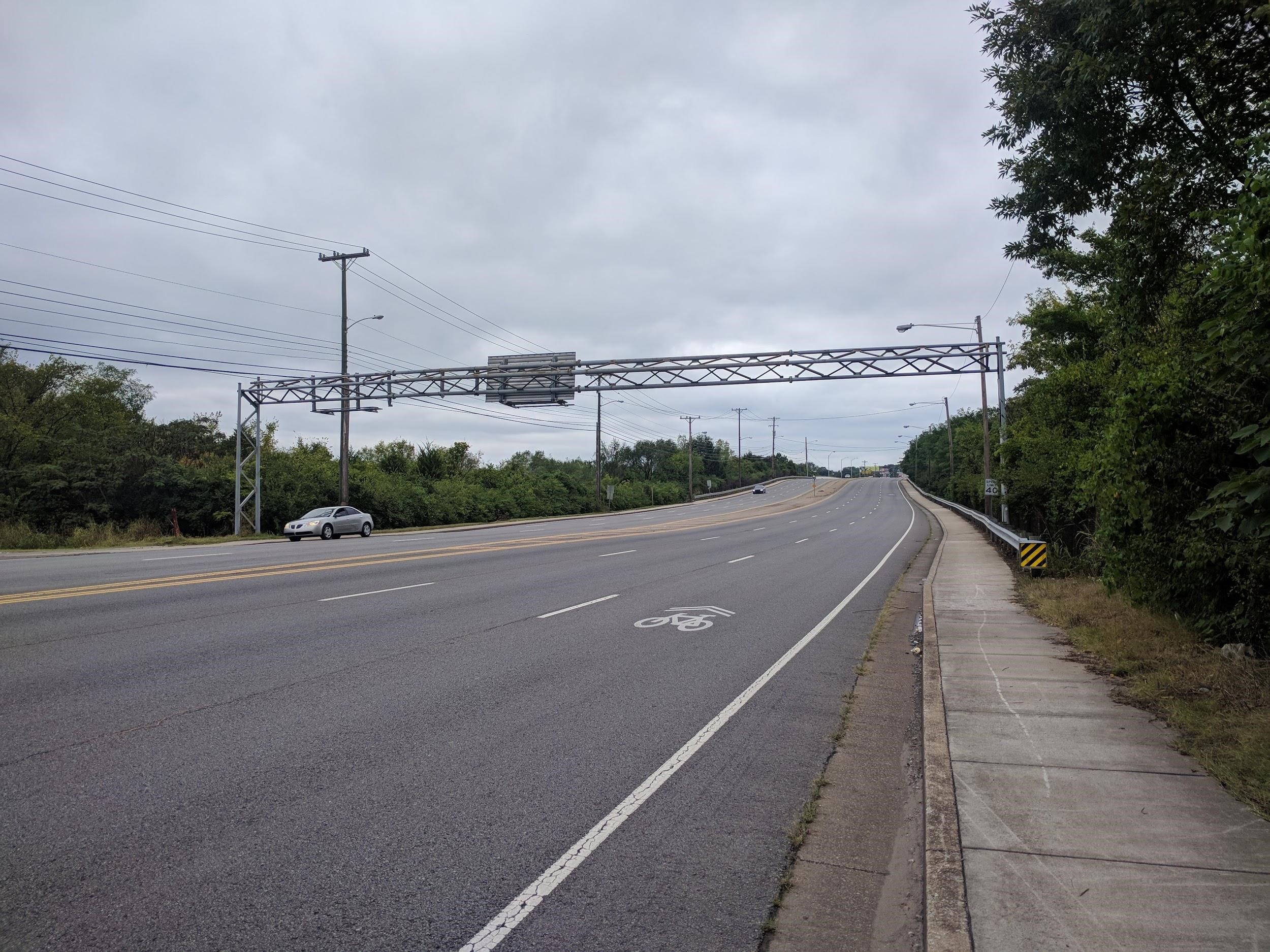 Google uses this kind of dataset from cities around the world, and the company—large though it may be—does not allocate staff time to sift through every road's street view in every city’s bike network. And Google should not have to in Nashville, because it's Metro’s job to design streets that keep all Nashville residents safe and enable the greatest number of people to move. Many of Metro’s and TDOT's current streets instead put Nashville residents’ lives needlessly at risk, and their datasets amplify that risk by directing people to bike on unsafe roads. Metro and TDOT need to rethink their maps, which no longer sit harmlessly in office building archives, but now provide direct guidance to thousands of citizens and tourists alike every week via Google Maps and other routing software.

It is time for Nashville to make safer streets for all users a priority by reducing speed limits throughout the Metro road network, and for the Tennessee DOT to replace dangerous sharrows with traffic-separated bike lanes. And both agencies need to be honest about what does and does not qualify as a “bike route” in 2018, cleaning up the data and removing dangerous sharrows accordingly.